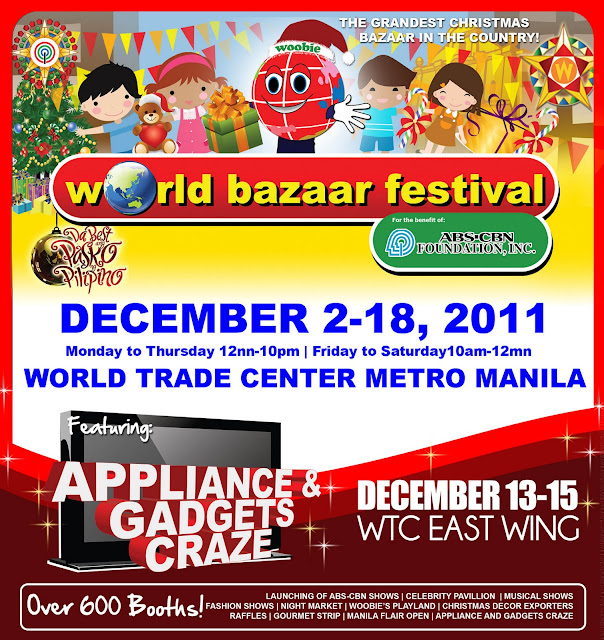 In the tradition of organizing hugely successful bazaars year after year, Wordbex Services International, in partnership with ABS-CBN, brings you this year’s longest and grandest charity bazaar in Manila, the 11th World Bazaar Festival.

From December 2 to 18, 2011 come and experience the longest Christmas bazaar with three shopping weekends at the World Trade Center - for the benefit of the ABS-CBN Foundation. Doors open from 12nn to 10pm every Monday to Thursday and 10am until midnight every Friday to Sunday.

Shoppers can choose from over 600 booths of fabulous finds from the country’s top retail brands – everything from toys to gadgets to books to handicrafts to sporting goods and many more. This event definitely has something for everyone and can surely fit everyone’s holiday budget.

In addition, you can also “shop ‘til you drop” with the biggest Kapamilya stars that will have their own celebrity booths - selling personal items for charity.
“Last year’s World Bazaar Festival was an overwhelming success, with thousands of people pouring in to shop their hearts out with our wide selection of products. This year, we look forward to organizing a Christmas charity bazaar that’s bigger and better than before,” JR Ang, Worldbex Marketing Director, shares. “We also have ABS-CBN and the Kapamilya stars to thank for their continuous support of our beneficiary. We are very excited to forward the proceeds of this event to the ABS-CBN Foundation.” 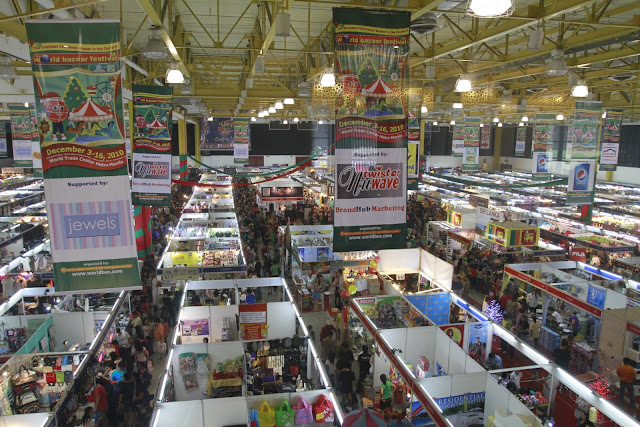 All over the world, Filipinos are known for celebrating Christmas in grand style thus the World Bazaar Festival pays tribute to the Filipino glee of celebrating the holidays with the theme “Da Best ang Pasko ng Pilipino”. Since this is the season where everyone gets into the spirit of gift-giving, the bazaar provides the perfect opportunity for people to give back to the community through the ABS-CBN foundation. Woobie, the official World Bazaar Festival mascot, will also serve as the Santa Claus for the event and will be giving away toys, appliances and showcases to chosen families as an early Christmas treat.

As a special treat to shoppers, a 2012 Worldbex Planner will be raffled off every other hour during the entire duration of the World Bazaar Festival.

Kids can also have a great time as they can write their Christmas wishes in the Make A Wish card and hang them in the giant 30-foot Christmas tree located at the lobby. Every Friday, a card will be chosen from the giant Christmas tree and the lucky kid will have his or her special request granted by the World Bazaar Festival organizers.

The event will also feature various ABS-CBN show launches, musical shows, fashion shows, and a celebrity pavilion. Other activities at the Bazaar that makes the countdown to Christmas even more exciting include a night market and the Manila Flair Open: Bottle for Supremacy, a premiere flair tending competition. Night bazaar goers and foodies alike can enjoy lanes of food stalls selling yummy treats, all open until midnight. Ample parking spaces are made available everyday for the convenience of all shoppers.

Lastly, the World Bazaar Festival will showcase an Appliance and Gadgets Craze that will run from December 13-15 at the WTC East Wing Tent. Credit card and ATM terminals are available for easy payment options.

Gather the troops and head on over to the city’s most happening place for holiday shopping, the 11th World Bazaar Festival from December 2 to 18, 2011 at the World Trade Center because truly - Da Best ang Pasko ng Pilipino!
By Shopgirl Jen at Wednesday, November 30, 2011

Woah! Jam-packed bazaar! Looking forward to this again! Will you be going, Mommy Jen? ☺