Time Out: Get Laud! Christmas Promo 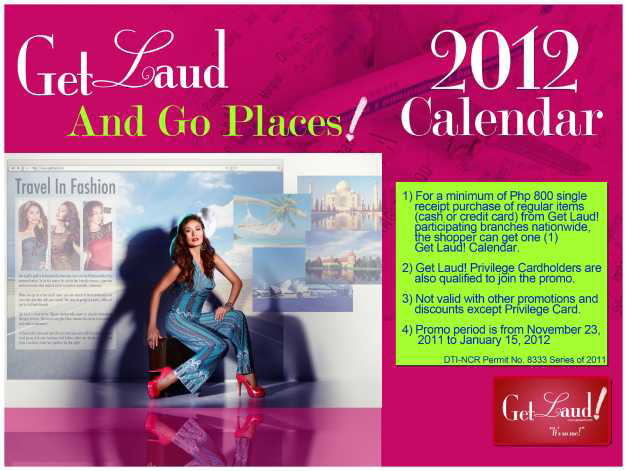 GET LAUD, the quality ladies' apparel, makes use of the finest imported and trendy fabrics throughout all their creations. Stylishly cut and locally sewn, GET LAUD clothing not only gives superb comfort but makes its customers instant fashionistas as well. GET LAUD also won the "Marketing Excellence" Award for 2010 and the "Most Promising Retailer" Award for 2007 from the Ayala Malls. Consecutively, in 2005 and in 2006, GET LAUD received the "Seal of Excellence" Award as the "Best Spandex Apparel Retail Store" given by the National Shopper's Association of the Philippines and the National Shopper's Choice Awards.

In order to celebrate these wonderful years of achievement, GET LAUD will be giving away exciting and chic 2012 tabletop calendars for free! In every calendar, enjoy GET LAUD coupons for a special treat each in store month of 2012.

Simply shop in any of the participating GET LAUD branches nationwide and purchase regular GET LAUD items for a minimum of Php 800 on a single receipt. For purchases, cash or credit
card may be accepted.


So be the first to grab a GET LAUD 2012 Calendar now! Happy Shopping!

Email ThisBlogThis!Share to TwitterShare to FacebookShare to Pinterest
Tags: Get Laud, PR Advertisement