A week ago, I was invited to attend the press preview of Pinocchio held at Onstage, Greenbelt 1. I brought Sofi and my Mom since I was given 3 passes. It was Sofi's 1st time to watch a play and it's been years since I last saw one. So imagine Sofi's kilig when she learned that she will watch a Pinocchio play! haha! Side kwento lang, she thought play is like a puppet show. Had to show her what play looks like on youtube. hehe! :D 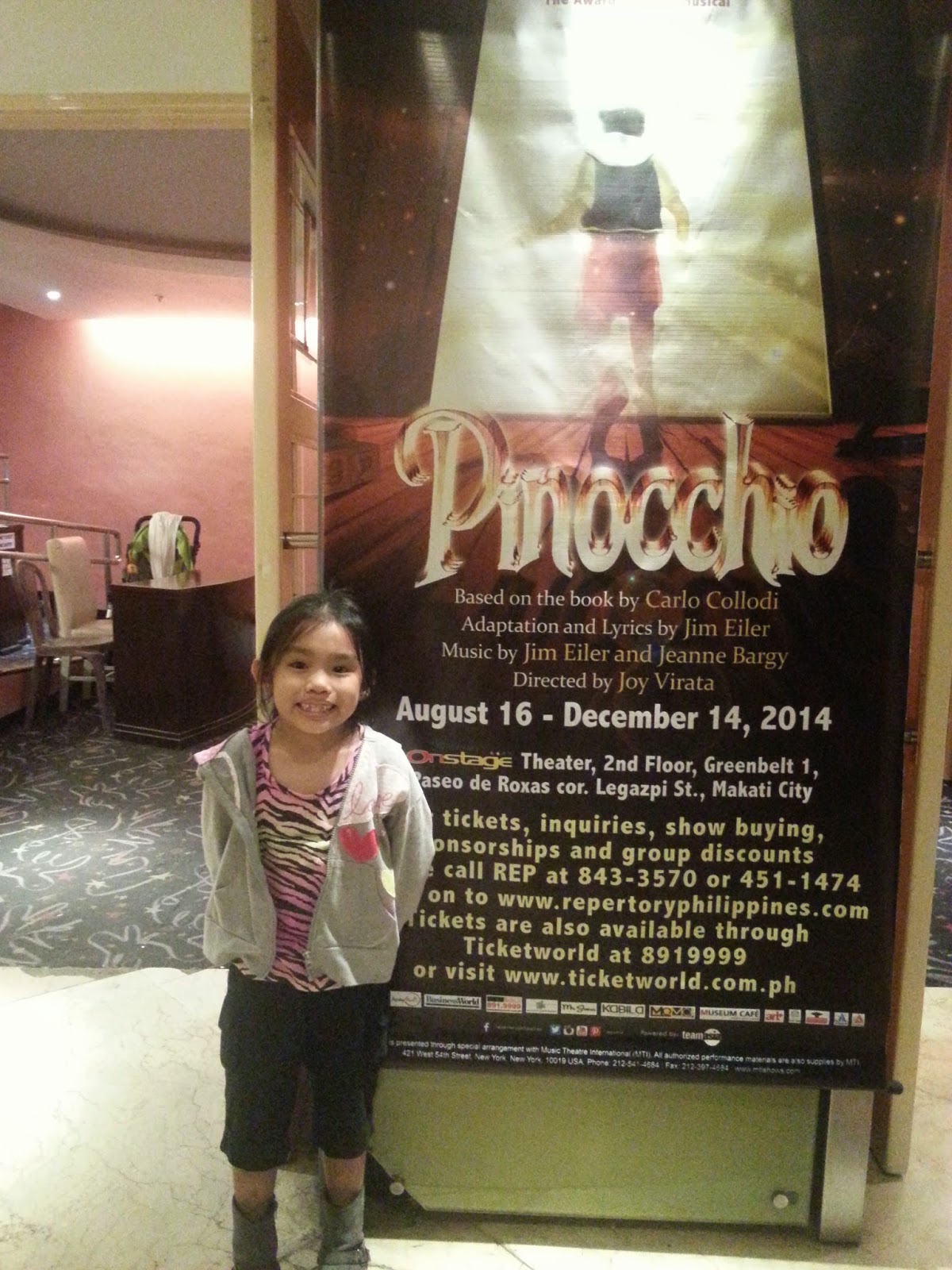 We are all familiar with the story of Pinocchio, right? Growing up with Disney movies, I'm sure you can tell the story by heart. Sofi's not that familiar though. Mas ma-princess kasi sya and fairy fairy. If you ask her the story of Tangled, Frozen, Cinderella, she will tell you the whole story without batting an eyelash! Haha! All she knows about Pinocchio is that every time he lie, nag grow ang nose nya. But the whole story? Not too much. And I'm glad we were invited to watch the play. We learned that it was not a Disney adaptation but it has been newly adapted for today’s young audiences in this award-winning musical based on the Book by Carlo Collodi, Adaptation and Lyrics by Jim Eiler; and Music by Jim Eiler and Jeanne Bargy. 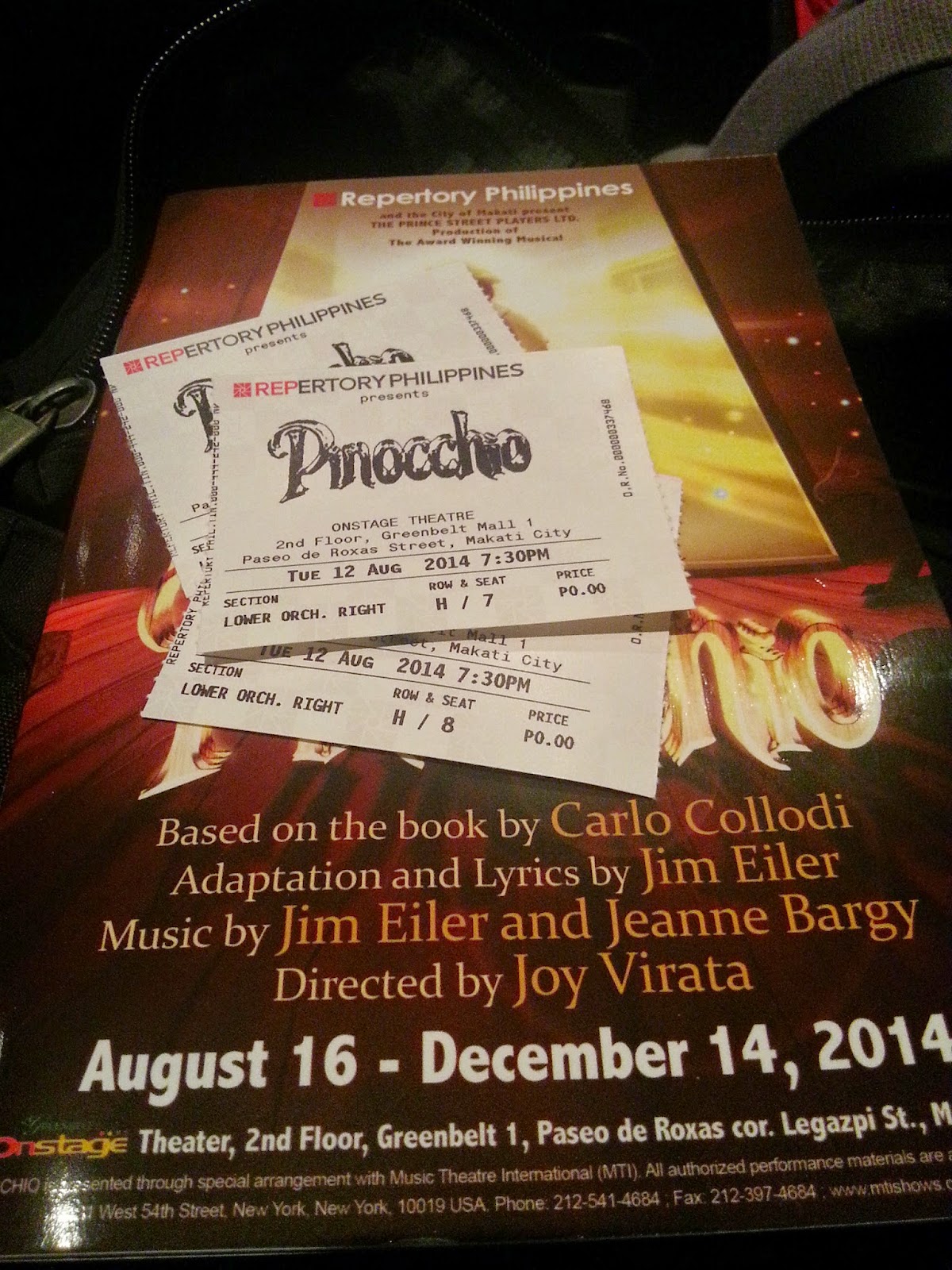 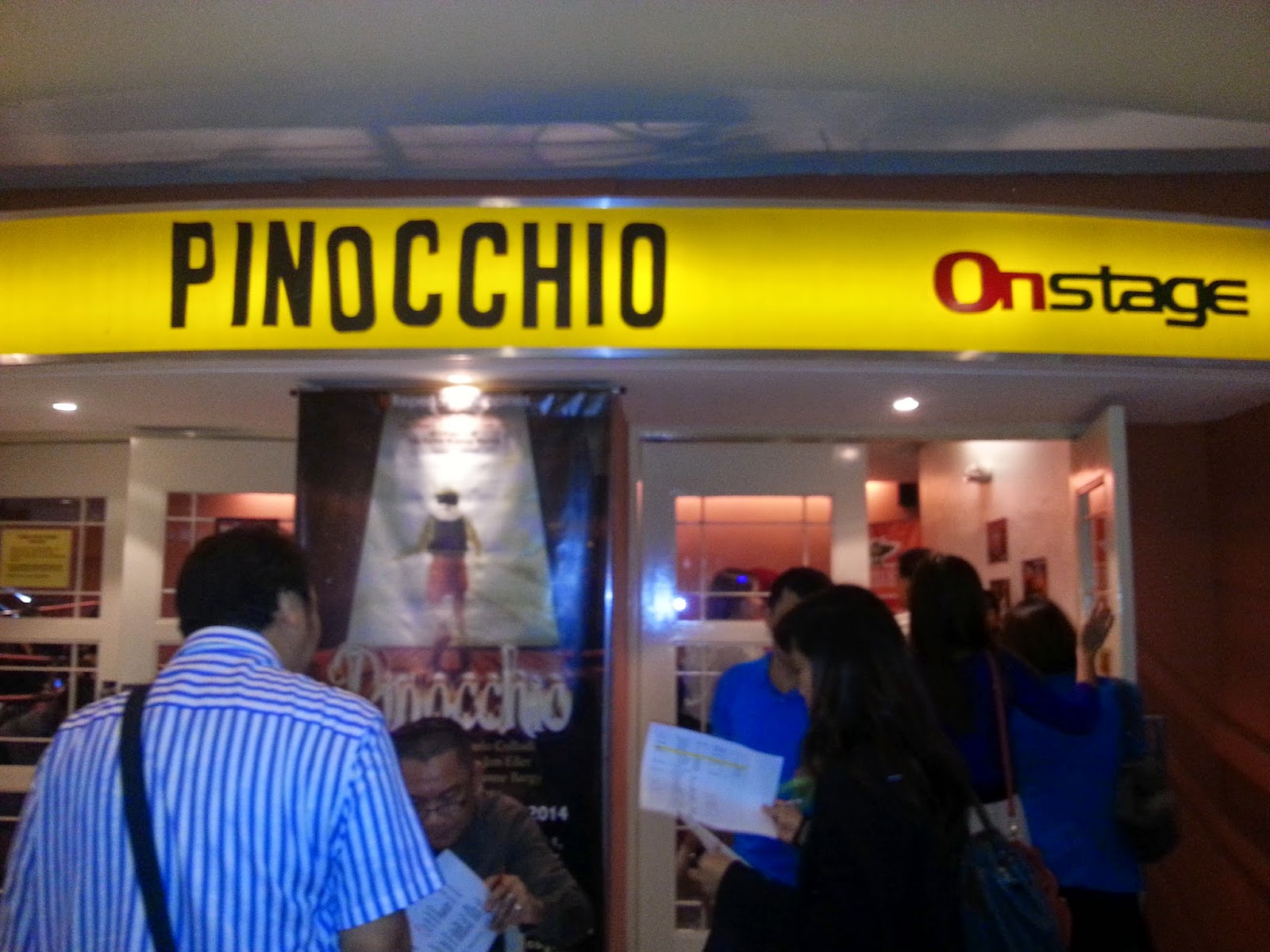 Set in Italy, this version tells the beloved tale of Pinocchio, a boy-sized puppet built by the caring puppet maker, Geppetto. Knowing of his longing for a son, the Blue Fairy brings Pinocchio to life as a reward for Geppetto's remarkably generous spirit. Pinocchio is told by the Blue Fairy that if he always obeys his father, she will turn him into a real boy. But the best laid plans can sometimes go awry and Pinocchio's boyish longings leads him away from his father and on an adventure unlike any other. From the Land of The Toys to the belly of a whale, Pinocchio learns that no love is greater than that of a parent for a child.

The new and fresh production of Pinocchio is a real treat for the entire family with a flurry of masks, music and merriment. It will be alive, charming and bursting with energy. The children in the audience will be spellbound with its visually stunning and colorful set design and costumes with loads of fun.

I personally loved the set. Sofi was focused too. Because of not too many props, you can see clearly all the actors and naka focus ka lang sa kanila and their dialogue. 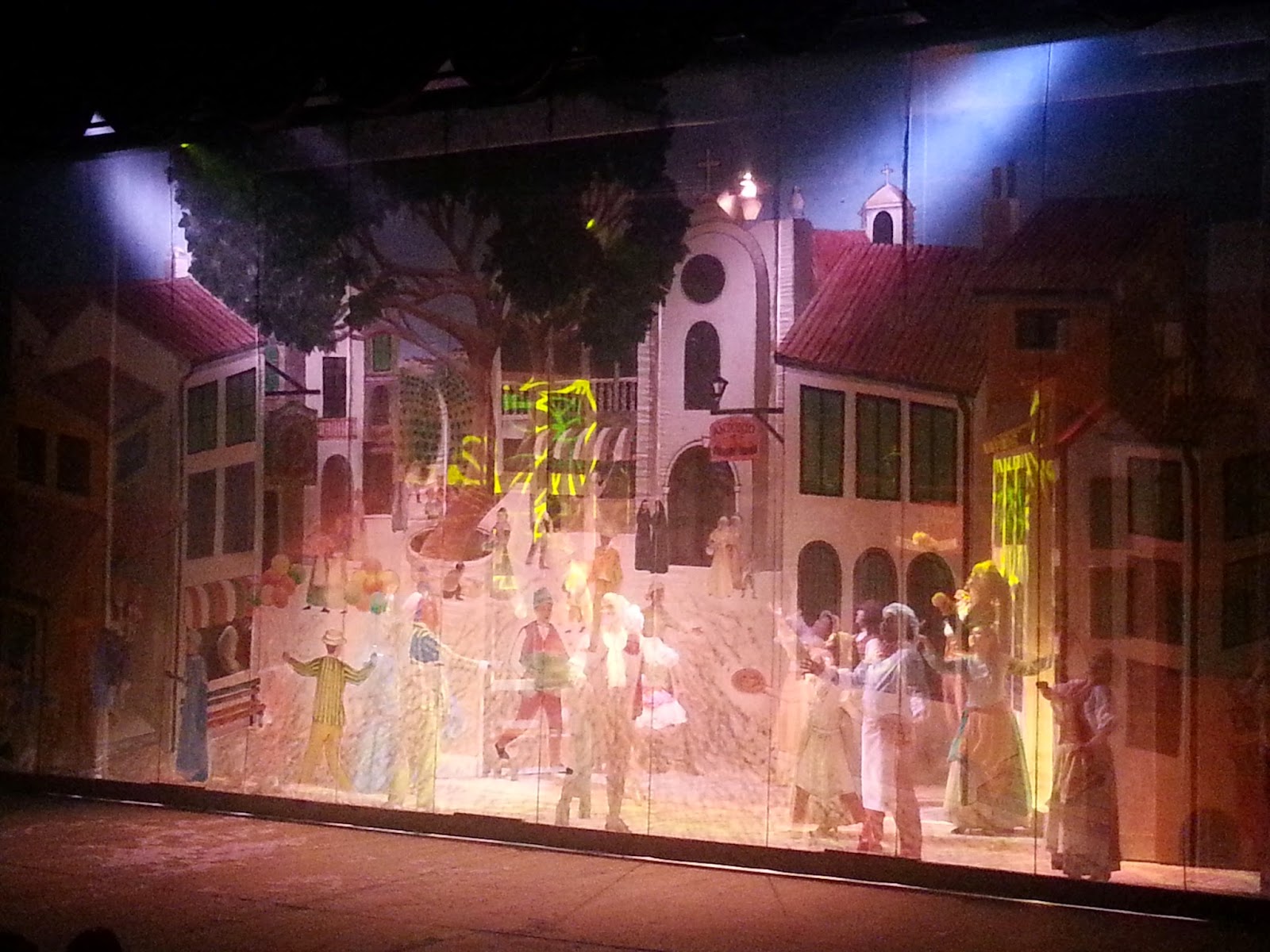 For this production, the role of PINOCCHIO will be alternately performed by Albert Silos, Noel Comia, Daniel Drilon, Guido Gatmaytan, Sofie Wong and Andee Achacoso. Pinocchio’s character is the epitome of naïve innocence and is led into trouble time and time again because of it. He is a curious, impressionable, and a sincere young lad. Oliver Usison and Nic Campos shall alternately play the role of GEPETTO, a toy maker who is noticeably warm-hearted and caring, spirited and fun loving. He is constantly yearning for a son and wants nothing but the best for Pinocchio. Arnel Carrion and James Stacey will alternately play the role of ANTONIO, the story's narrator, as well as other characters in the village. He will interact with the audience throughout the show with his inviting, engaging, energetic charm. Antonio Lane and Jay Pangilinan shall alternately tackle the role of CANDLEWICK, the young and rambunctious rule-breaker. With his bratty and mischievous attitude, he leads Pinocchio into trouble with several other boys.

And it's a musical too! A lot of kids watched the show, pero during the show surprisingly they were all quiet. They were all concentrating and following the story! The music beat were catchy too! 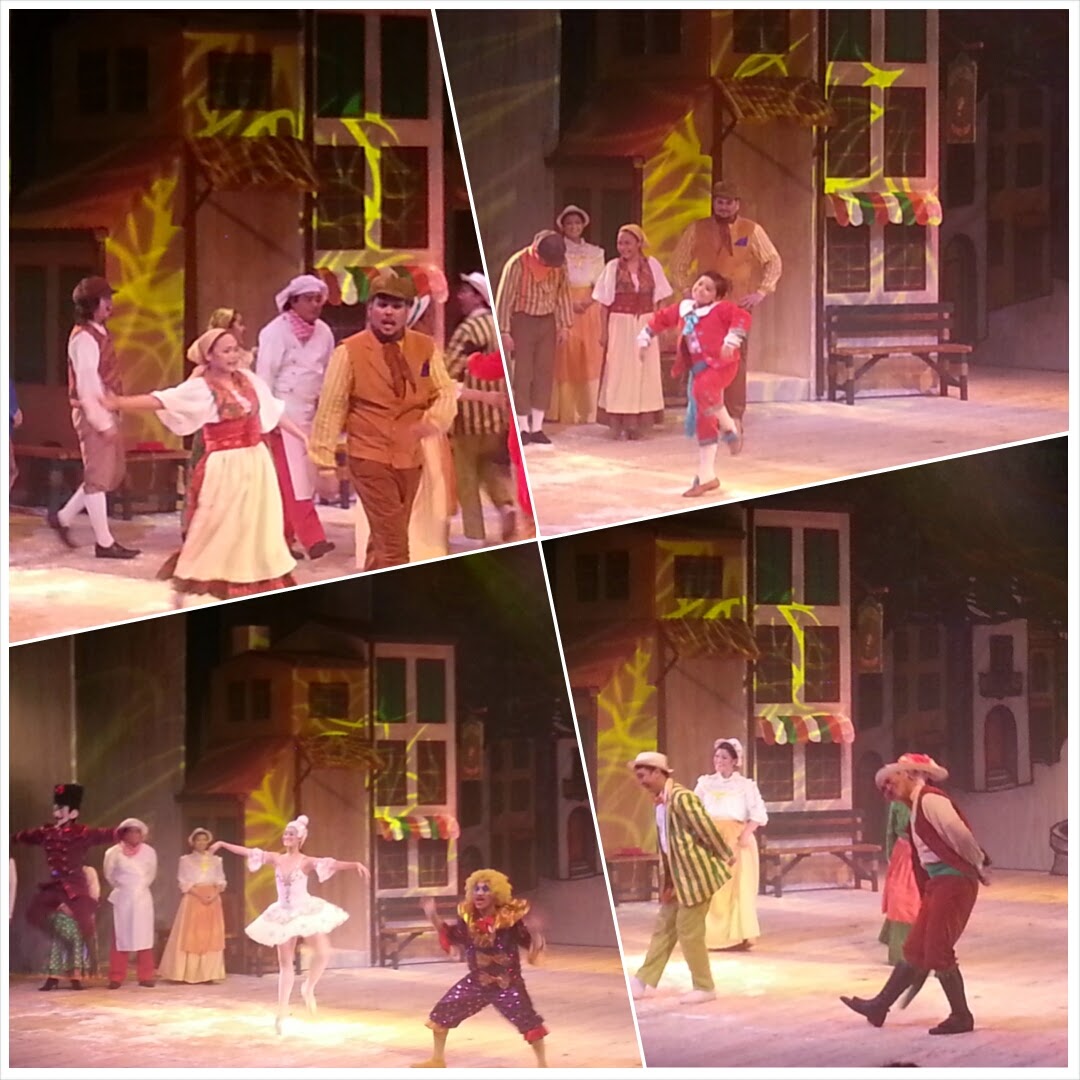 Natalie Everett, Ring Antonio and Bituin Escalante will alternately essay the role of Angelina, Geppetto’s housekeeper. She cares deeply for Geppetto’s well being and possesses a loving rapport with him. A thoughtful and clever woman. Liesl Batucan, Christine Flores and Cara Barredo will alternately play the role of the Blue Fairy, an omniscient presence and motherly figure. She looks out for and guides Pinocchio. She is kind, gentle, and generous to those pure of heart. Steven Conde and Steven Hotchkiss will alternately play the role of Signore Volpone, the ringleader of a sinister plot to exploit naive children. He operates as the "brains" of the operation and keeps Signore Gatto in his place. Portrayed as a fox, he is dishonest thief with great cunning and craftiness. 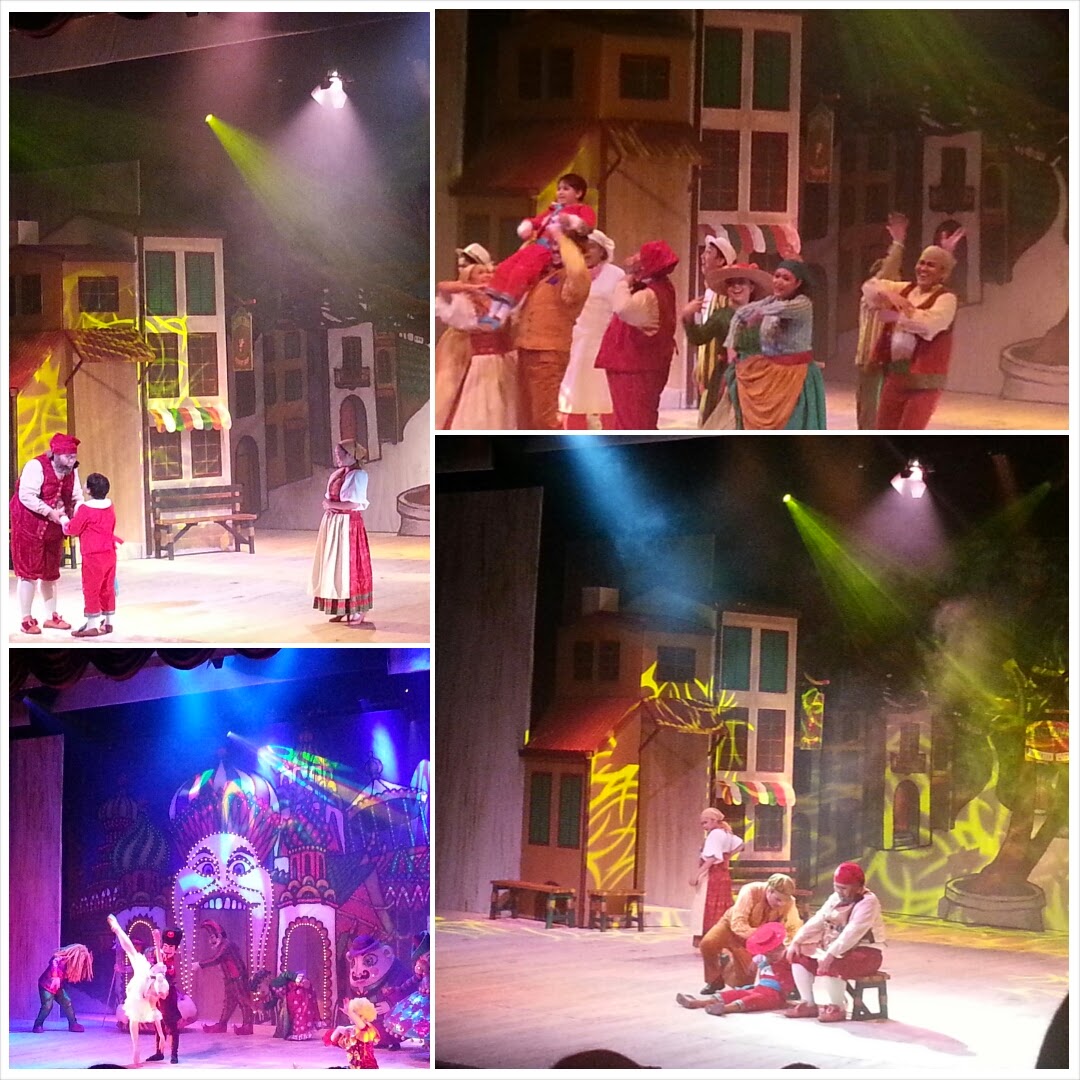 The cast during the Q&A from the press media 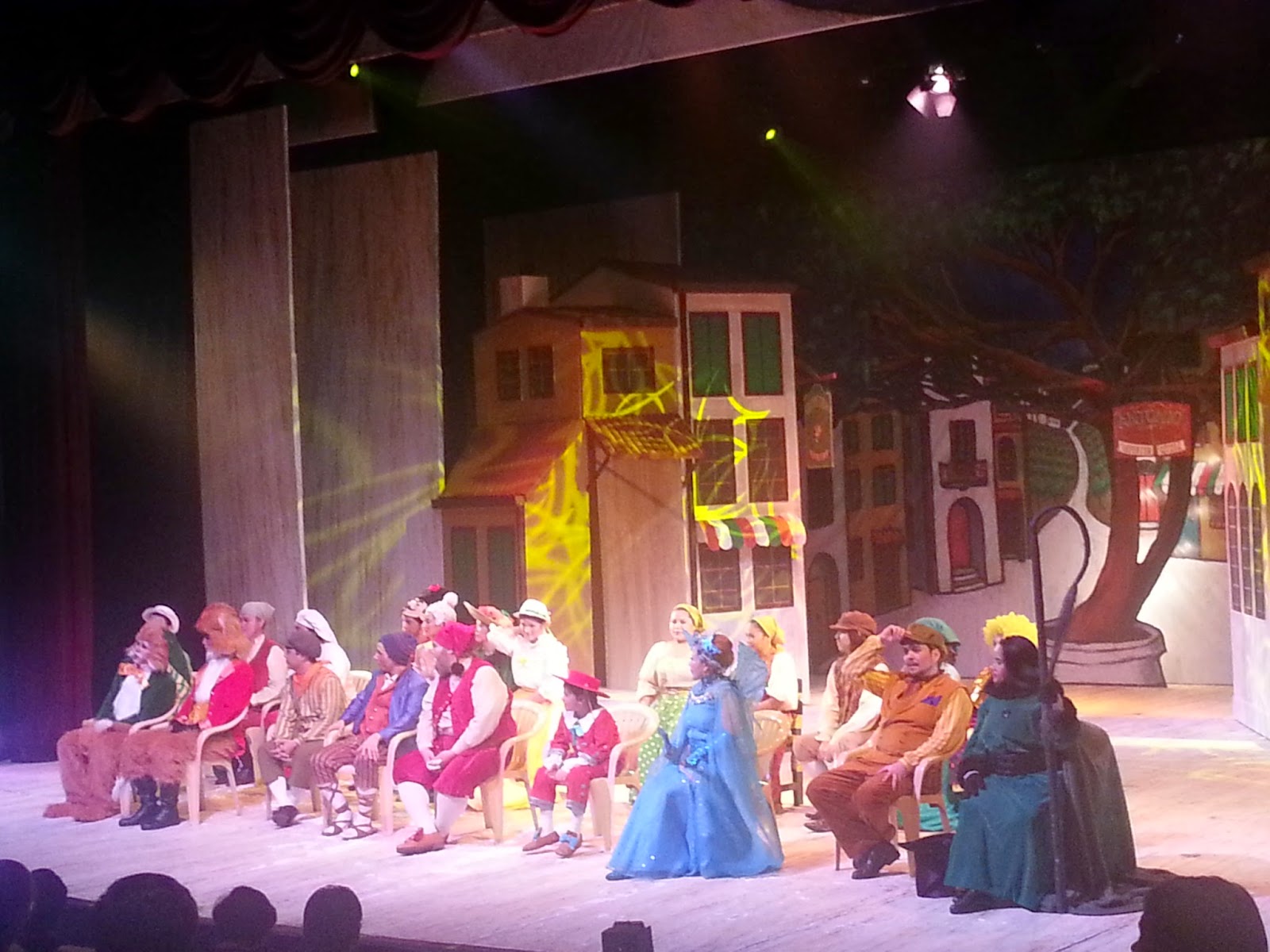 Ms. Joy Virata (in white), artistic director of Repertory Philippines Therater for Young Audiences will direct PINOCCHIO. This marks her third time to direct this musical since it was produced in 1996 and 2004 respectively. 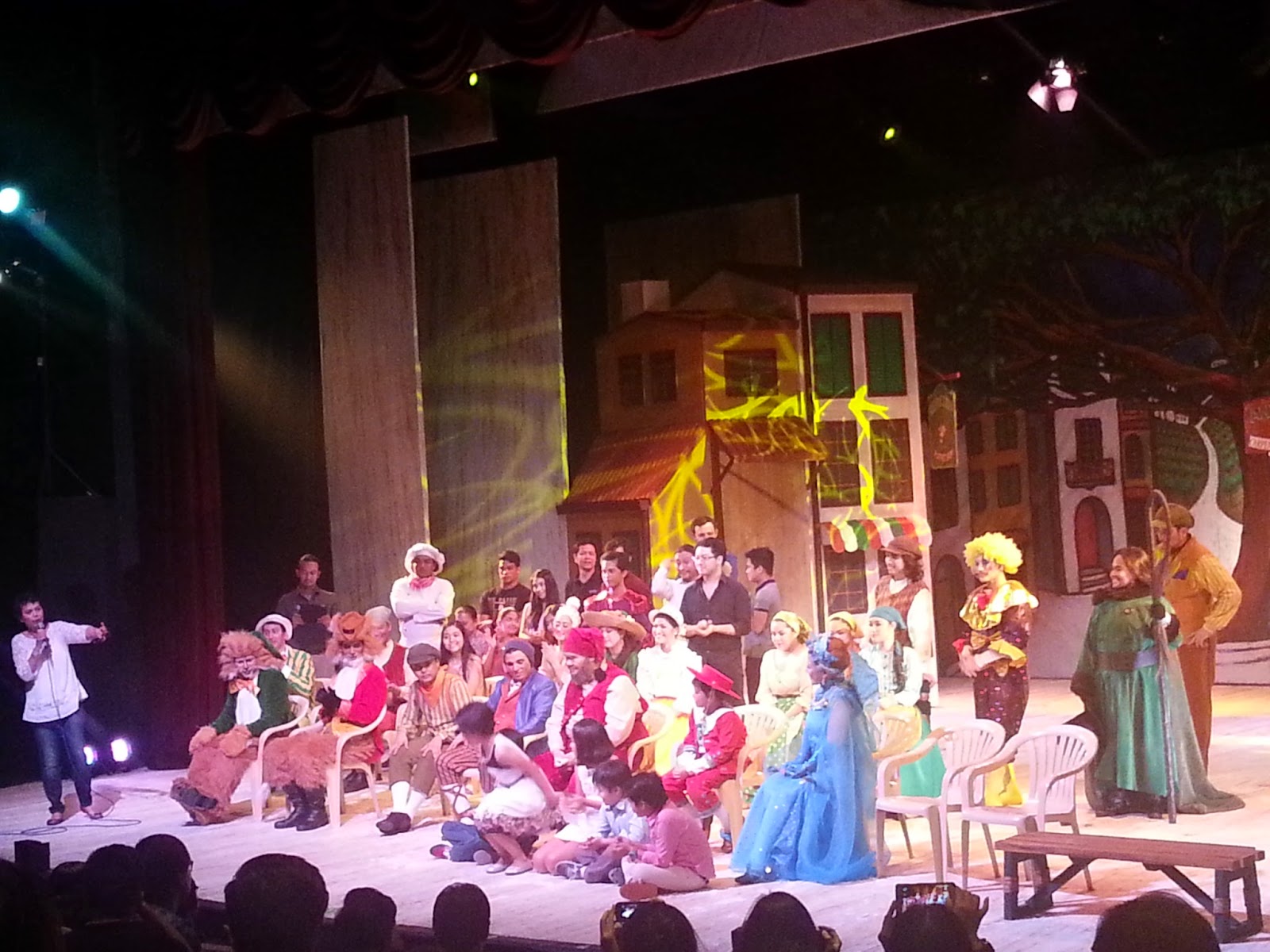 We really had a great time! We were so amazed with the cast especially at the boy who played Pinocchio! How did he memorized those steps and lines? Galing! 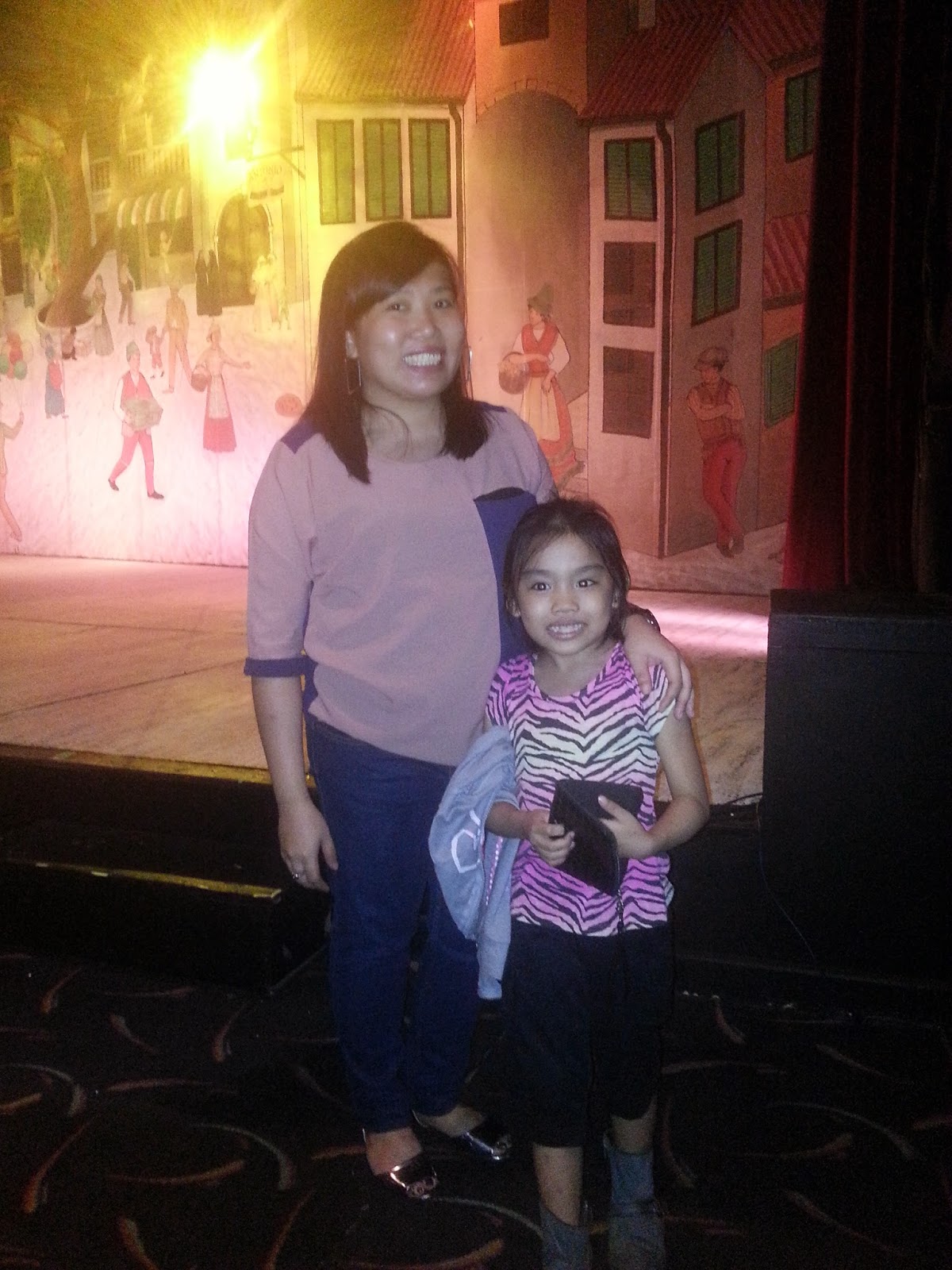 Here's your chance to watch Pinocchio with your family! A really brilliant musical for kids, PINOCCHIO promises to be a completely unique theatre experience --- a modern remix of the original story told with vim, verve, vibrancy with the overall message of the importance of good behavior !!!

Thank you so much Repertory Philippines for having us!

I'm sure my kids would enjoy this, especially real live people singing and dancing. They are a bit familiar with the Disney Pinocchio, but the movie was old, so maybe it didn't catch much of their attention when it was shown on Disney.

I hope the will run this here in Cebu too! My son would love to see this!

Your daughter's preference for princesses is understandable! I like the story but it's kinda disturbing though. I'm sure they didn't include the disturbing stuff in the musical (I hope?)

Looks like a good play. I hope to see the show with the family.

Sayang there's no Pinocchio here in Cebu. The last time I saw a musical/play of sorts was probably back in high school still. Ang tagal na! I should probably keep my eye out on events like these. Thanks for sharing - hope you had a great time!

I really want to watch Pinnochio on stage with my family, hopefully before the series ends, i want to watch Bituin Escalante on stage, she's really great!

I miss musicals and theater! I hope my son will grow to appreciate them to I can take him to see shows and performances. From what you've written, the cast sounds amazing!

Oh I wish we can watch one of their shows! My daughter loves Pinocchio too.

I wanna watch this too. Pinocchio's storymay not appeal to most but I like it a lot

I heard good reviews of this show. I wonder how much is the ticket kaya?