The wait is almost over to those who wants to have the latest from Samsung Philippines! I know I want!! And Yay to Globe Telecom as the first telecom company in the Philippines to launch Samsung’s latest flagship devices, the Samsung Galaxy S6 and Samsung Galaxy S6 edge, with an online site that accepts pre-orders from Globe postpaid and Platinum customers.

“The long wait is over for all Samsung fans in the country. Globe is once again pioneering the launch of the latest devices in the Philippines with the arrival of the new Samsung Galaxy S6 and S6 edge. With our pre-order site, we are able to serve pre-orders from early customers and Android fans. Aside from giving our postpaid customers the privilege of being the first to experience the latest Samsung smartphones with our myLifestyle Plan, we are also enriching their mobile experience with free access to entertainment as well as a free premium item when they pre-order online until April 5,” says Erli Valdez, Vice President for Globe Postpaid Business. 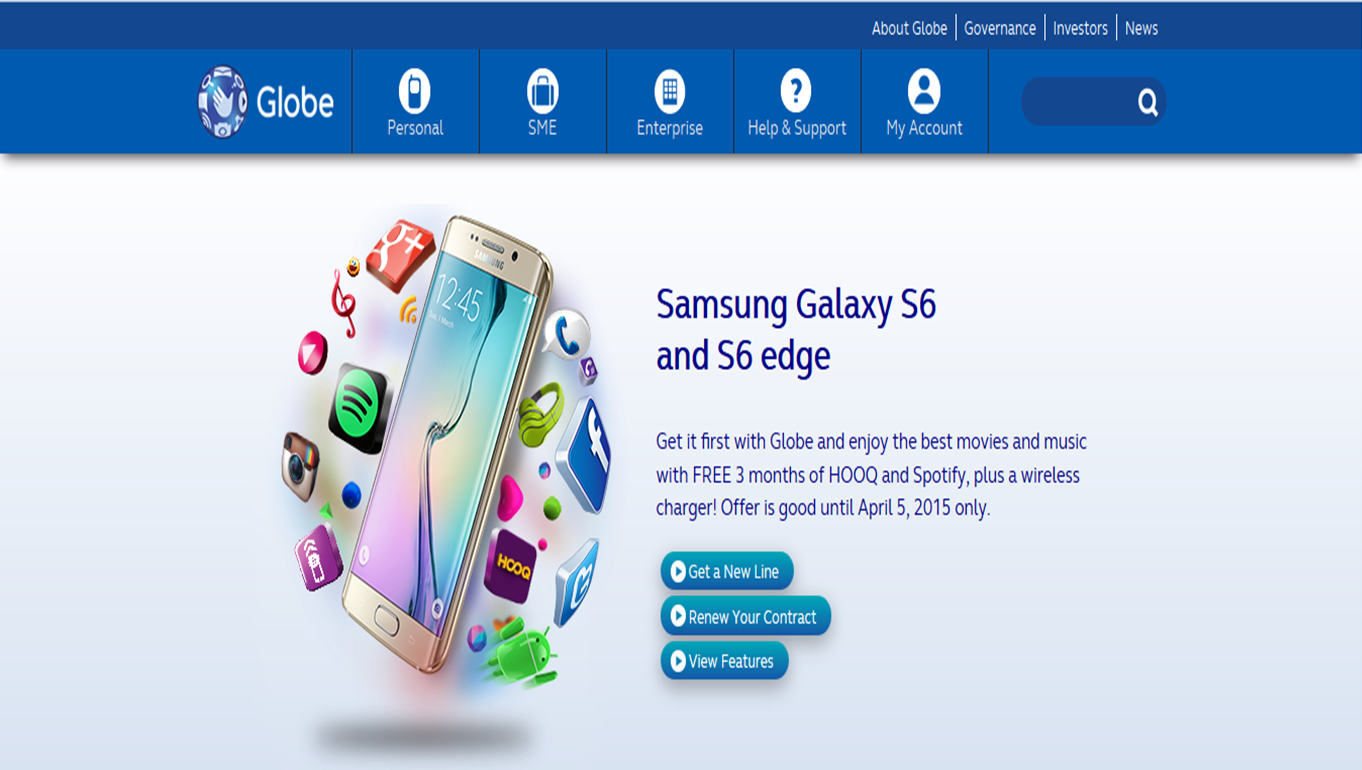 With over three weeks to go until the official release of the Samsung smartphones in the country, Globe customers will be the first to own the much-anticipated next-generation smartphones. As an added treat, new and existing Globe customers who pre-order the Samsung Galaxy S6 or S6 edge will get free exclusive content such as 3-month subscription to Spotify where they can create their own playlist with millions of songs and 3-month access to HOOQ where they can watch from a selection of over 10,000 movies and TV series from local and international partners.
All customers who will pre-order online are also entitled to receive a free limited edition Samsung wireless charger and a discount voucher which will give them up to 15% discount on Galaxy S6 and S6 edge accessories.

On the other hand, the Samsung Galaxy S6 edge 32GB is available at Plan 1499**, which comes with unlimited calls and texts to Globe/TM, GoSURF499 (3GB mobile internet), all-you-want Chat and Facebook plus free Spotify Premium for 3 months, free HOOQ for 3 months, free Gadget Care and Navigation Bundle for 1 month, and free 1GB of Globe Cloud.

Globe Platinum customers can also avail of the Samsung Galaxy S6 edge with all pre-order freebies on its newly-introduced Platinum Lifestyle Plan 4999, which offers unlimited calls and texts to all networks, 15GB worth of local mobile data, access to Facebook, Viber, Gmail, Yahoo Mail, Evernote and Globe Cloud on top of the 15GB data allocation, worldwide roaming services and a roster of exclusive Platinum perks and privileges. Plus, pre-orders will be delivered direct to the customer’s doorstep.

The Samsung smartphones also allow users to live their passion to the fullest as they sport an incredibly fast wired charging which is 1.5 times faster than the Galaxy S5, providing about 4 hours of usage after only 10 minutes of charging plus a 1.5GHz octa-core processor and multi-window feature which allow users to multi-task seamlessly.

To know more about Next Galaxy with S6 and S6Edge, read it HERE.