The magic of Christmas is here! I can't wait to watch this!!! Christmas is not the same without watching Disney on Ice at the Smart Araneta. Last year, when we watched Disney On Ice Treasure Trove (back story here), they mentioned that they will be featuring Frozen in their next show. And after one year, Disneyn On Ice is back and it's more magical than ever! Not only our favorite princesses are back, but they brought the Arandelle sisters to join them. Woohoo! Can't wait!!!

Now on its 33rd show worldwide, Disney On Ice presents Magical Ice Festival will once again capture the hearts of the Filipino fans—both parents and their children—who will watch the show at the Big Dome.
This year’s grand production will wow viewers as it features  Disney’s The Little Mermaid, Tangled, Beauty and the Beast, and – for the first time – the Academy Award winning and number one animated feature film of all time, Frozen! 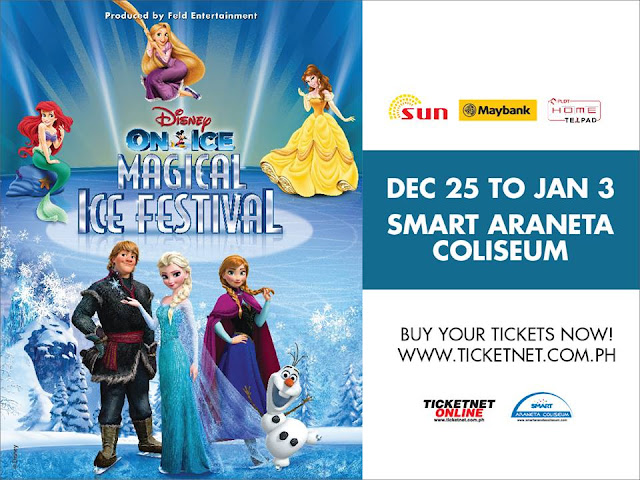 Disney on Ice presents Magical Ice Festival showcases a medley of splendid set elements, impressive light display and costume pieces, along with show-stopping performances by a cast of world-class skaters!

“Everyone will be in awe as they watch Ariel slowly pulled upwards and then rapidly twirl above the ice. This is the first time that we’ve captured her transformation like this in a production. That’s what makes Magical Ice Festival different, we selected scenes we’ve never done before and then took our time on the details to make them truly special,” says director Patty Vincent.

Sure to amaze and delight kids and young at heart, Disney On Ice will take you to an unforgettable magical journey as you get whisked away into the wintry world of Disney movie’s Frozen!

“In our more than 30 years of producing Disney On Ice shows, Feld Entertainment has been waiting for a film like Frozen,” says producer Nicole Feld.

“By pulling together moments from classic Disney stories to the newest feature film sensation Frozen and combining them with elements of comedy and music, we developed a truly unique way to re-tell each fairytale,” says producer Juliette Feld.

Celebrate Christmas with your family and Disney favorites Mickey Mouse, Minnie Mouse, and Goofy, together with Ariel, Belle, Rapunzel, and sisters Anna and Elsa in the enchanting world of Disney on Ice presents Magical Ice Festival.

The show runs from December 25 to January 3. Tickets are now on sale. For more information, visit TicketNet website or call 911-5555.

Thank you Smart Araneta and Feld Entertainment for bringing our favorite princesses back! Happy Holidays!

Email ThisBlogThis!Share to TwitterShare to FacebookShare to Pinterest
Tags: Bulletin Board, Disney On Ice, press release