Learn more about the Repertory Theater for Young Audiences (RTYA) through the latest play, Hansel and Gretel.  See these wonderful kids perform on stage and witness how much passion and dedication they gave for the love of Theater. 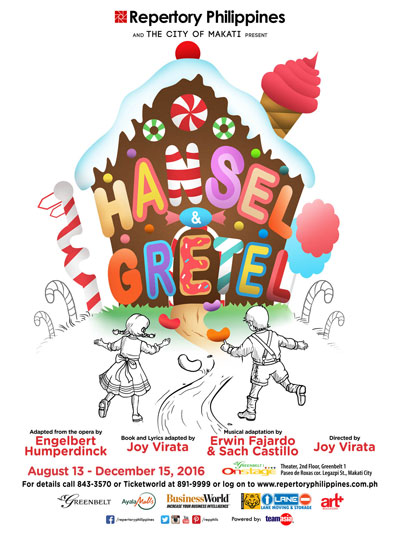 When you go to see a Repertory Theater for Young Audiences (RTYA) offering, you are treated to whimsically enchanting costumes, an enjoyable story with value-added life lessons, exuberant music, entrancing sets and lights, enthusiastic performances by excellent actors and an all-around entertaining time! The actors and audiences have so much fun that everything is made to look so simple… so easy.

The making of a Repertory Theater for Young Audiences production takes as much as, if not more, time and effort as putting together a major musical does. Joy Virata, the founder and moving force behind RTYA can attest to that!

For RTYA, as in all things – ABC for reading or do-re-mi for singing – you start with the basics and, in theater, that means the material – what story you will stage… what script you will choose. RTYA has tried and tested guidelines in choosing its material.

“First, of all, the plays have to be musicals,” says Mrs. V, as she is fondly referred to. Of course they have to be. Music and songs appeal to children of all ages. Music is the proverbial spoon full of sugar that makes the medicine go down. Children may not listen to lectures or sermons but they will sit up and listen to songs.

The material must also be short – an hour and 15 minutes at the most - designed for a child’s shorter attention span.

“Then, of course, the plays must be written specifically for young audiences,” adds Mrs. V. “Dialogue has to be simple and can be understood by children who might not speak a lot of English. Messages or lessons must be universal. That is, they cannot be too culture specific – too American or British – so our children can relate to them more.”

“Finally, the material must have a familiar title — something that both children and teachers know immediately.” This is why most, if not all, RTYA productions have been and are based on fairy tales, stories that have been made into movies or stories that are curriculum based, i.e., taught in schools.

Finding material for a play has become easier with the advent of the internet. You can now surf through children’s theater companies’ websites, look for plays for young audiences and scab through play catalogues for possibilities.  Before the advent of the internet. Mrs. V had to manually go through catalogues of Samuel French and Music Theater international and/or physically and personally browse through theater book stores in New York and London.

Though plays have become easier to find, actually acquiring the material has become more difficult. RTYA has done all the plays from their go-to source – Jim Eiler and Jeanned Bargy of the Prince Street Players. Their version of “Sleeping Beauty” was RTYA’s first offering and is, to date, is Repertory Philippines’ Number 1 box office hit. Rep has exhausted their library of plays – even repeating some several times. “We could definitely not repeat an Eiler-Bargy play,” Mrs. V declared with finality.

Rights to other material has also become increasing difficult to get.  “We used to be able to get rights to do the children’s version of Disney plays but are not allowed to do them anymore. We couldn’t afford the scripts I wanted from other sources.”

Which is why Mrs. Virata decided to write one for RTYA! After almost 24 years, RTYA is producing its very first original adaptation of another classic fairy tale, “Hansel and Gretel,” a title they had never done before. Adapted from the opera by nineteenth-century composer Engelbert Humperdinck, Mrs. V used its more popular tunes, rewrote lyrics and wrote a whole new book for it to fit RTYA specifications – short, simple and universal.

Finding the material, however, was only the beginning. There were composers and arrangers to be found, costumes and sets to be designed, a production team to be assembled and actors to be cast.

After all these years, RTYA has this process down pat but it still isn’t foolproof.

“Music, sets and costumes are vital for the success of a production of children’s theater… and I have a basic idea of what I want — depending on the script and how I feel,” Mrs. V says. She shares these ideas with the production and creative teams and they take it from there.
The set was designed by a Rep regular, now a multi-awarded scenographer, Mio Infante. “For Hansel and Gretel, I had a definite idea of what I wanted—completely “story book”, fantastical, set no-where, not real.  Mio came up with the perfect set.”

Most of all the other “usual suspects” with regards music and costumes were, however, unavailable for “Hansel and Gretel.” Mrs. V has had to tap new talent for these.

The music was adapted from the opera by Erwin Fajardo and Sach Castillo. Mrs. V “found” them through her contacts from the Union Church Chancel Choir. New to writing for musical theater, both men are graduates of the U.P. College of Music and work largely as independent musicians and in advertising. “They were so thrilled to do something different,” comments Mrs. V, “and the Fajardo-Castillo tandem does bring something refreshingly different to “Hansel and Gretel.””

Costumes were even more problematic. “I wanted out-of-the-box costumes especially for the main characters. I especially wanted the Witch to be outrageously non-witch-y and funny.” Again, no one could do it. So, they opted to use a relative “newbie,” Mrs. Zenaida Celdran Dalao to execute the costumes based on design pegs researched on the internet.  Although new to costume design, Mrs. Dalao has been in the design industry for 20 years and generously stepped in at the last minute to create the three sets of costumes for 30 actors. Costumes? Check!

Several sets of children to play Hansel and Gretel were found through exhaustive audition processes. The RTYA pool of actors were called in to fill in the various roles. Rehearsals proceeded at breakneck speed and strenuous schedules BUT all problems were solved!

The final product will show no signs of the behind the scenes drama or the problems encountered all throughout its inception. All the audiences will see is yet another high quality production with its usual absorbing story, stunning sets and costumes, stirring music and first rate performances by an amazing acting ensemble made up of theater stalwarts, RTYA regulars and brand new “recruits.” It will all look like mere child’s play!

Just perfect since RTYA’s “Hansel and Gretel” is after all a child’s play!

Brought to you by Hansel Sandwich and the City of Makati, in cooperation with Greenbelt, Ayala Malls, BusinessWorld, Lane Moving & Storage, Art+ Magazine, Philippine Daily Inquirer, TicketWorld, and What’s Happening.com.ph, with TeamAsia as its media partner.

“Hansel and Gretel” opened last August 13 and will run until December 15 at the Onstage Theater in Greenbelt 1, Paseo de Roxas cor. Legazpi St., Makati City. For tickets and reservations call Repertory Philippines at 843-3570 or TicketWorld at 891-9999. For more information log on to www.repertoryphilippines.ph or visit Rep’s Facebook page.