With a rich selection of content available to Filipinos since the availability of Netflix in the country, fans were able to enjoy and discover a rich catalogue of shows to fall in love with -- from old favorites like Gossip Girl and Suits to new original series Narcos and Orange is the New Black. But with so much to watch, how long does it take before Filipinos decide to commit to a series?

According to the research, here are the average episodes where members around the world got hooked: 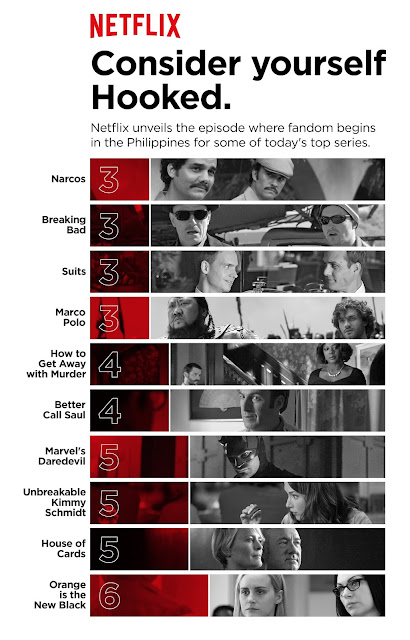 Spoiler alert: It goes beyond the first episode.

Examining global viewing of more than 60 shows*, Netflix pinpointed the specific episode that took watchers from casual to committed. That is, 70% of viewers who watched this episode went on to complete season one or more poetically, when members were hooked there was no turning back.

The Netflix study reveals that viewers today do not base their decision to finish a series on the first episode alone. “Given the precious nature of primetime slots on traditional TV, a series pilot is arguably the most important point in the life of the show,” said Ted Sarandos, Chief Content Officer for Netflix. “Yet in our research across the region, we found that no one was ever hooked on the first episode. This matches with our viewing data in other parts of the world, and gives us the confidence that great, original stories travel when commercial breaks and appointment viewings are stripped away.”

Moreover, Netflix discovered viewing behavior, and fandom, is becoming increasingly universal — and Pinoy Netflix subscribers are getting into this viewing behavior too as they get complete control of their entertainment experience.

In fact, members in the Philippines were drawn to the world of Narcos in the same episode as those in Argentina (episode 3) while fear of the unknown had fans in Singapore and France reeling for Stranger Things (episode 2). Meanwhile, love had viewers in South Korea, India, Italy and Ireland smitten with Gilmore Girls (episode 8). Regardless of whether they live in the Philippines or Poland , Singapore or Sweden, members around the world are not only getting hooked on similar episodes, but identifying with similar storylines.

While there’s some consistency around how fans around the world get hooked on episodes, there are some interesting viewing behaviors found among fans in the Philippines. For example, Filipino viewers easily get hooked early on with shows that allow them to live vicariously through law-breaking characters featured in shows such as Breaking Bad, Better Call Saul, How to Get Away with Murder, and Narcos. Filipinos also prefer a long brew for their dose of superhero justice with Marvel’s Daredevil and Marvel’s Jessica Jones.