Heads up to early Christmas shoppers: mobile technology brand OPPO announced today that the Neo7, a smartphone known for its sleek design and powerful cameras, dropped its price from Php 7,490 to Php 5,990. 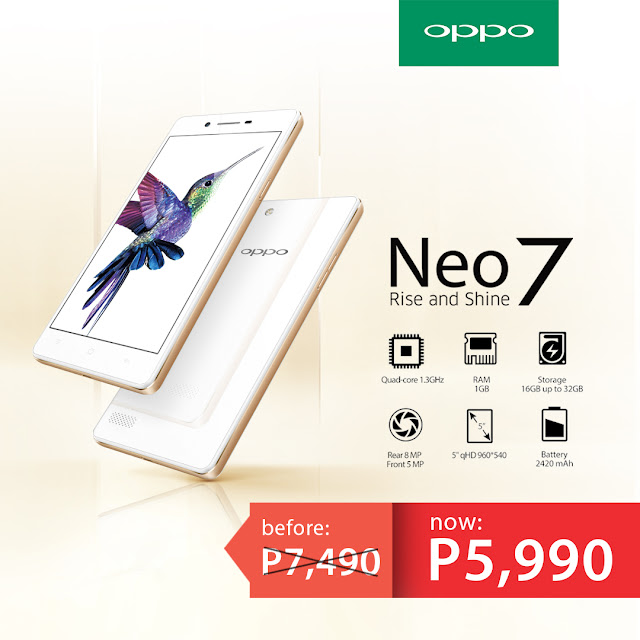 “The Neo7 is perfect for those who love taking selfies and those who want to have more fun with their smartphone photos,” said OPPO Marketing Brand Manager Stephen Cheng. “We offer the Neo 7 at a discount so more users can experience its outstanding capacities to capture unforgettable moments.”

Camera-ready for the holidays
The Neo 7’s 5-megapixel front camera captures crisp and clear selfies even in low-light situations, thanks to its frame rate and higher light sensitivity. It is equipped with the Beautify 3.0 with low, medium, and strong built-in beautification modes that let users achieve their desired looks at any time of the day.

Neo 7’s light-sensitive sensor adjusts screen brightness to different lighting conditions, making it an ideal camera for night-outs with families and friends. The phone also uses 11 various filters so that image enhancement will no longer require too much intervention from camera apps.

The phone is also capable of capturing professional-quality photographs thanks to its rear camera. This 8-megapixel camera comes with a wide F/2.0 aperture that lets in more light for clearer night images, which can be enhanced further using the phone’s night mode feature. The Double Exposure feature takes and combines two separate photos to achieve a thrilling visual effect.

The smartphone’s 4G version offers an Ultra-HD mode that captures six photos consecutively. The photos’ best parts combine in a 24-megapixel image that is four times clearer than ordinary photos.
On top of all these, the Neo 7 has a PI 2.0+ imaging platform functionality that adds and deletes functional plug-ins. This lets users fully customize the camera to their preferences.
Elegant and sleek

The Neo7’s rounded edges makes handling more comfortable, especially while taking photographs.
The mirror-like back cover is also designed with optical coating and fiber glass for increased strength and elasticity despite being only 0.56mm thin.

The Neo 7 is now available in concept and dealer stores nationwide.