It changed the lives of Filipino mobile users when it launched–and now it continues to delight and reward its loyal users that have stuck with it over the years.

Chikka Text Messenger, the pioneering app that allows users to send text messages to their friends and loved ones for free via the Internet, today announced the launch of its ‘TXT2WIN’ promo which will reward everyone with a chance to win brand new smartphones every week. 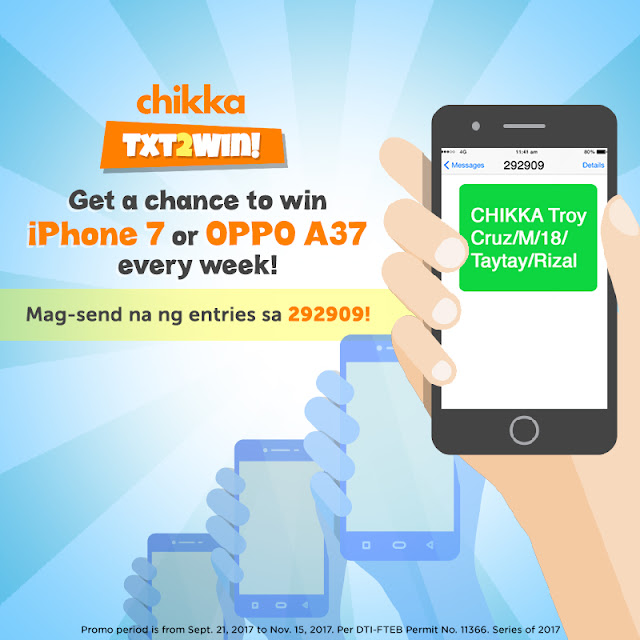 All they have to do is text CHIKKA <space> NAME/GENDER/AGE/CITY/PROVINCE (ex. CHIKKA TROY CRUZ/M/18/TAYTAY/RIZAL) to 292909 for all mobile networks, and they will automatically earn an entry to the weekly raffle draws where they can win either an Oppo A37 or an Apple iPhone 7 phone.

“Chikka has been a household name for the past decade, especially as a reliable tool to help bridge communications between Filipinos here and abroad,” said Heidi Garayblas, Head of Integrated Marketing and Communications at hatch, the digital customer engagement arm of Voyager Innovations. Chikka is one of the many digital and mobile platforms being offered by hatch to millions of Filipino users nationwide.

“This ‘TXT2WIN’ promo is our way of giving back to loyal Chikka users–and to all mobile users in general–who have continued using the service throughout the years. This is just the beginning of more exciting things to come from Chikka in the near future,” Garayblas added.

Throughout the years, Chikka has been a reliable partner of Filipinos in instances where they run out of prepaid credits to text their friends, colleagues, or loved ones. By simply downloading the Android or iOS app or logging on toim.chikka.com, they can get a limited number of text credits which can be used to send SMS to all mobile users in the Philippines.

The Chikka TXT2WIN promo is open to subscribers of all mobile networks in the country. Downloading the Chikka app is not a requirement to join the promo. Weekly raffle draws will begin on October 2, 2017 and will last until November 20, 2017.

For more information, check out the Chikka Facebook Page atfacebook.com/ ChikkaPhilippines/. Per DTI-FTEB Permit No. 11366. Series of 2017