Ever wondered what sparked some of the most momentous events in history? Most of the time, it’s conflict. But sometimes, they’re consequences of decisions made hastily, strategically, or emotionally.

From an Indian lawyer going overseas to work, an African American seamstress commuting home, to an aspiring German aspiring artist and a very efficient devout monk, below are some people who made life defining, history-making decisions that changed the world forever. 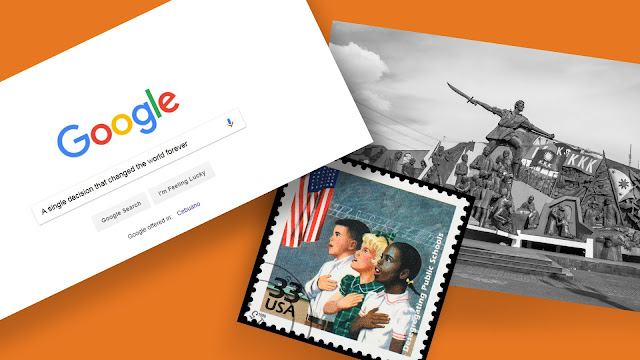 When no one wanted to buy into the idea of “Google”
Google’s success originated from one simple idea of Larry Page and Sergey Brin in the late 1990s. They realized that the sprawling, chaotic mess of content and material existing in the World Wide Web could be “optimized” by ranking search results by how often a content was cited similar to how an excellent research paper is cited by different papers. Their first version of the “search engine” was so successful the graduate students tried to sell the idea for $1 M. Unfortunately (or fortunately for the world!), there were no takers. So, they decided to put up the business themselves and well, you can Google the rest!
What it led to: The internet! Need we say more?
Benefit for you: We consume information as easy and as regularly as we drink water!

When Rosa Parks refused to give up her seat in a bus
On December 1, 1955, African American seamstress Rosa Parks decided she didn’t want to give up her bus seat to a white American man. At that time, African Americans were required by a Montgomery, Alabama ordinance to sit at the back half of city buses and give up their seats to white Americans if the front half of the bus was full. Rosa Park was arrested and fined for not yielding her seat, which sparked the Montgomery Bus Boycott, the first large-scale US demonstration against segregation. One of the leaders of the protest: a young pastor named Martin Luther King, Jr.
What it sparked: Racial equality
Benefit for you: Now people of color, like us Filipinos, living in the United States enjoy equal treatment and opportunity.

When Andres Bonifacio met with Emilio Aguinaldo in Cavite
Ahead of the controversial 1897 Tejeros Convention, Emilio Aguinaldo and other Cavite leaders invited Andres Bonifacio, Father of the Philippine Revolution and president of the Katipunan, to Cavite to supposedly mediate the rivalry between two provincial factions of Katipunan, the Magdalo (Aguinaldo’s) and the Magdiwang (Bonifacio’s). Despite multiple attempts of his friend and Katipunan secretary Emilio Jacinto to dissuade him from going, Bonifacio decided to meet Aguinaldo and his Magdalo cronies in Cavite. There, he lost the presidency and, ultimately, his life when he was sentenced to death for treason.

What it led to: In a twist of fate, Emilio Aguinaldo lost the presidency to Manuel L. Quezon in the 1935 Commonwealth elections because people didn’t trust him after what he did to Bonifacio.
Benefit for you: Philippine independence from America through the passage of the Tydings-McDuffie Act, which Manuel Quezon strongly fought for.

But you don’t need to fight oppression, start a revolution, or rewrite history to recognize the power of one single decision. The small decisions you make every day can make the difference between a number of situations—good or bad—in your future. It can be something as simple as taking the train to work instead of your usual two-hour drive or begging off attending another office party to be in time for dinner with your kids or something life changing as eating healthy or taking control of your finances by setting aside P2,000 a month to secure your family’s future.

With pan-Asian insurer FWD Life Insurance Philippines’ newest product, Set for Tomorrow, you can choose from three variants—Short Term Cover, Income Protector, and Estate Protector—that will suit your financial needs and stay with you as you make everyday decisions that will shape the future of your family. Want to know how much it will take to secure your family’s future? Ask Cali, http://bit.ly/SetforTomorrowCalculate.

Be empowered to make your own financial choices—build your first family home, send your kids to the best schools, and bequeath your wealth to them—worry-free. Make your loved ones’ tomorrow better today, no matter what happens. Every step in the right direction—no matter how small—counts. To learn more about FWD’s Set for Tomorrow visit http://bit.ly/GetSetforTomorrowNow.