PLDT remains to be the undisputed fastest fixed network in the Philippines with its four-peat record at the Ookla®Speedtest Awards™. The latest Speedtest Awards™ for Q1-Q2 2021 shows PLDT achieving the fastest download and upload speeds in Makati, Cebu, and Davao, with an overall speed score of 46.25 for the quarter – besting all other major internet providers in the country.

Ookla noted that the telco giant recorded top download and upload speeds of 113.2 Mbps and 136.61 Mbps, respectively. This was culled from data comparing millions of consumer-initiated tests taken on Speedtest® platforms. These include speed tests using computer devices connected to a fixed network, as well as over a Wi-Fi connection.

“PLDT’s digital servis have greatly contributed to the lives of many Filipinos as we navigate the new normal of working, studying and doing things at home. The Ookla Speedtest Award™ is a recognition of our unwavering initiatives to provide the best broadband connectivity through our robust expansion and migration of our fixed network to serve more Filipino homes nationwide,” says Butch G. Jimenez, Jr., Senior Vice President and Head of PLDT Home Business. 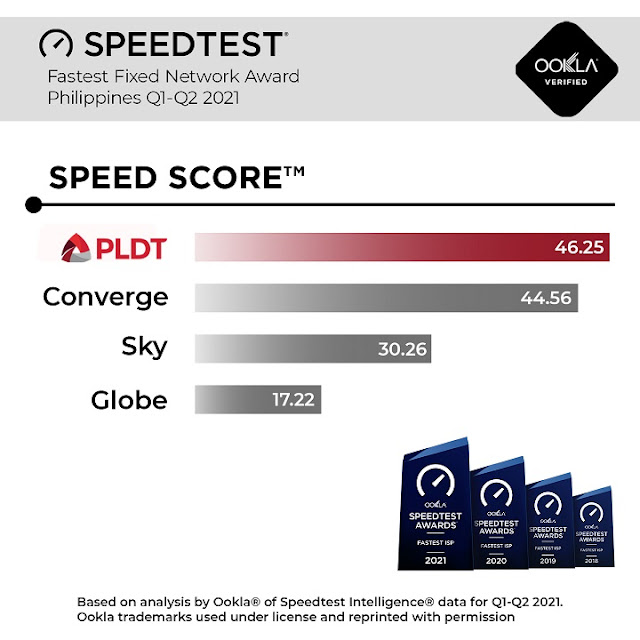 This is the fourth consecutive year since 2018 that PLDT gained the top spot awarded by Ookla®, the global leader in broadband network intelligence.

“Speedtest Awards, presented by Ookla, are reserved for an elite delegation of network operators that have delivered exceptional internet performance and coverage within a market. It is our pleasure to present PLDT with the award for Fastest Fixed Network in the Philippines. This recognition is testament to their exceptional performance in Q1-Q2 2021 based on Ookla’s rigorous analysis of consumer-initiated tests taken with Speedtest,” said Doug Suttles, Ookla CEO.

Analyzing internet speed data per city, Ookla® places the biggest emphasis on a network’s download speeds and median speeds as those represent what most customers experience on a day-to-day basis. Ookla® assessed the best network speeds attained across a given network, accounting for tests that are taken on various Speedtest® platforms. 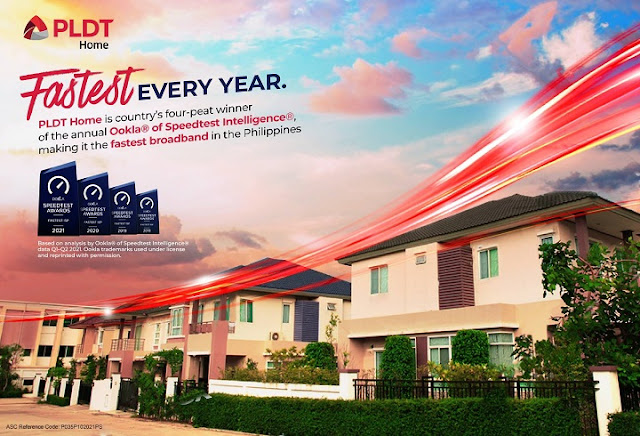 To date, PLDT reigns superior with the most powerful and fastest fiber network in the country, delivering up to 1000 Mbps symmetrical speeds. This enables users to experience equal upload and download speeds, and seamless video streaming.

Reinforcing its network superiority, PLDT continues to aggressively increase its fiber infrastructure reaching 524,000 kilometers, extending its reach to 11.3 million homes passed and 4.8 million fiber-powered ports in the first half of 2021.

The company also leads in providing future-ready homes with access to superior Wifi technologies in the market – including the Wi-Fi 5, Wi-Fi 6, and Wifi Mesh solutions, through flexible broadband plans.

PLDT is also on track to increase its broadband subscriber base by one million by yearend as the company rolled out aggressive programs to improve install capacity, offer superior products and broadband plans, and innovative loyalty customer programs.

Know more about PLDT Home products and services at www.pldthome.com.