PERSONAL COLLECTION REMAINS AT THE FOREFRONT OF PROTECTING THE ENVIRONMENT; PARTICIPATES IN INTERNATIONAL COASTAL CLEANUP DAY

Personal Collection Direct Selling, Inc. strengthens its commitment to protecting and preserving the environment by taking part in the International Coastal Cleanup Day spearheaded by the Department of Environment and Natural Resources (DENR).

Now on its 36th year, the International Coastal Cleanup Day is a worldwide movement that engages people to remove trash from coastlines and waterways around the globe. The data gathered from the cleanup drive is submitted to the US-based NGO Ocean Conservancy, serving as a basis for creating policies that concern marine conservation. Dealers and employees from Personal Collection joined other volunteers from private companies, NGOs, and the public as they collected tons of wastes that pollute Metro Manila coastlines. 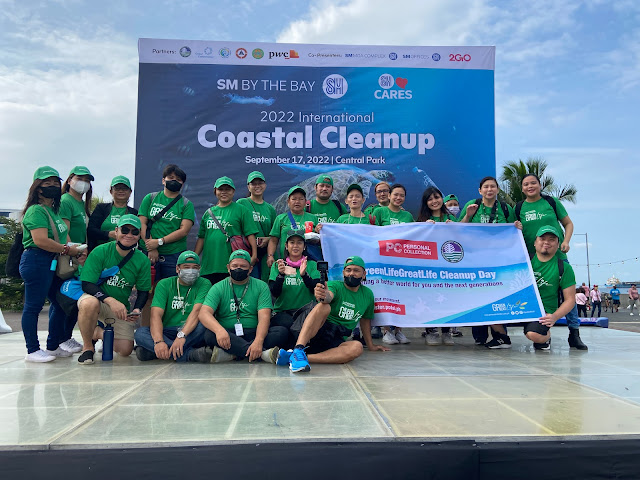 Over 15,000 volunteers took part in the environmental campaign which was held simultaneously in eight sites in Metro Manila, including the SM Mall of Asia seaside area, Las Piñas-Parañaque Wetland Park, Dolomite Beach, BASECO Beach, Tanza Marine Park, Tangos North and South, and behind the CCP Complex in Pasay. With the theme “Fighting for a Trash-Free Manila Bay,” the cleanup drive is in line with the government’s Manila Bay Rehabilitation Program. Roughly 100,000 sacks of trash were collected during the event. DENR reported that plastic sachets and plastic bottles were among the top items collected – an environmental concern that Personal Collection has since been addressing through the #GreenLifeGreatLife movement.

Launched in 2021, the #GreenLifeGreatLife movement saw the company’s shift from recyclable to biodegradable packaging, starting with its top-selling household products. The biodegradable packaging was designed to decompose within five to ten years in landfill conditions, thereby reducing the company’s carbon footprint. This move puts Personal Collection at the forefront of promoting environmental responsibility, with a lifelong commitment to making the world a better place for the environment and for the future generations.

Personal Collection’s staunch support for the International Coastal Cleanup Day is just one of the company’s continuing efforts in environmental conservation under the #GreenLifeGreatLife movement. Since 2021, the company has planted over 115,000 mangroves and trees in different parts of the country to help protect the country’s coastlines from erosion and revive marine life. These include over 15,400 trees and mangroves in Bulacan, Tanay, Rizal, and La Mesa Eco Park, Quezon City in the past few months since April 2021. In the same period, tons of trash were collected during coastal and estero clean-ups in Metro Manila, Antipolo, Batangas, Cavite, and Negros Oriental.