Once again, Coca-Cola made happy history with a massive nationwide concert party for the Filipino youth to celebrate its 100th year in the Philippines - the Coca-Cola Concert ng Bayan!

The rocking concert party, which gathered Pinoy teens from all over the country unfolded at the SM Mall of Asia concert grounds last March 23, 2012 and simultaneously shown live in key locations nationwide including SM Baguio, SM Lucena, SM Cebu and SM Davao and streamed via coca-cola.com.ph, allowing everyone across the country and the world to be part of the energizing music, the unlimited festivities and of course, the overflowing happiness.

“The Coca-Cola Concert ng Bayan is our gift to the Filipino teens whose positive spirit, refreshing creativity and passion for happiness have always been indestructible. In tandem with our Coca-Cola Happiness President Caloy, they have made this historic event possible! In this epic year, we are all-out in giving the whole nation more and more reasons to be happy. The last 100 years would not have been a success if not for the Filipinos who made Coca-Cola part of their everyday lives,” said Guillermo Aponte, president and general manager, Coca-Cola Philippines. 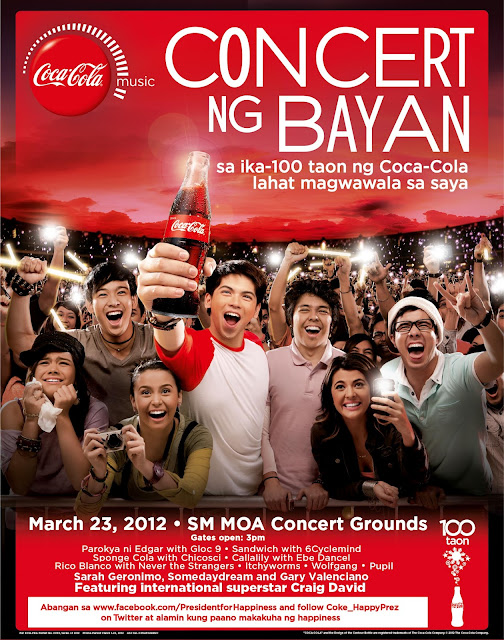 The grandest leg of its centennial celebration in the country to date, the groundbreaking music fest did not only witnessed the epic joining of forces of top Pinoy bands including Parokya ni Edgar with Gloc 9, Sandwich with Jay Durias, 6-Cycle Mind with Eunice & Kleggy, Callalily with Ebe Dancel, Rico Blanco with Never the Strangers and Itchyworms, SpongeCola with Chicosci, Ely Buendia with Pupil and Wolfgang plus DJ QYork but also a refreshing collaboration by sought-after, A-list performers Gary Valenciano and Sarah Geronimo as well as fast-rising electro-pop artist Somedaydream, for the infectiously fun and upbeat, chart-topping Coca-Cola 100 Years anniversary anthem, Tuloy.

The musical extravaganza, which lasted for more than ten hours, featured back to back to back showstoppers and culminated to a groundbreaking building projection and fireworks display that further ignited happiness through the whole venue and beyond. The visual spectacle signifies the long-standing relationship between Coca-Cola and the Filipinos throughout the years; 100 years of shared happiness that shall continue to flourish in the next century! On top of all these, raffle draws were held in between segments by the masters of the day: TV hosts Robi Domingo, Jose Manalo and Wally Bayola, Monster RX 93.1 DJ Gino Quillamor and Myx VJs Mike Advincula, Joyce Pring, Chino Lui-Pio and Bianca Roque. Lucky winners got to take home one year supply of Coca-Cola and other delightful premium items.

And again, that’s not all! The high-spirited Coca-Cola Happiness President Caloy also made an appearance before legions of fun-loving teens, sharing a few words of happiness and thanksgiving for the constant and unmatched support Pinoys are giving Coca-Cola.

Indeed, there’s no better way to finally close the school season and welcome a fun-filled summertime than rocking out with an ice-cold Coke in hand! And the best part? Craig David was there to join the party! Yes, the international R&B superstar came all the way from the other side of the globe to be part of Philippine music history and to open and share the sound of happiness across the whole nation with Coca-Cola!

Yet, through all the fun fare, Coca-Cola also got to remind everyone about the value of proper garbage disposal and recycling. As part of its Live Positively commitment, specially designed mesh bins were set-up in strategic locations within the venue to ensure partakers dispose off their used cups, food wrappers and other trash properly.

No question, the epic Coca-Cola Concert ng Bayan signals the start of a summer filled with even bigger surprises as the 100th year celebration of Coca-Cola gets to a whole new high. And we can only be sure our favorite beverage brand shall continue to collaborate with every single Pinoy to give the whole nation nothing less than refreshing happiness!