SEARCH FOR THE HAPPIEST PINOY DOWN TO 10 FINALISTS

The Search for the Happiest Pinoy nears its grand finale as the top 10 finalists are revealed. Celebrating the values of optimism, resilience and hope among Filipinos, the competition aims to find a Filipino who has a positive outlook in life, was able to rise above life’s challenges and had a positive impact in the lives of others. 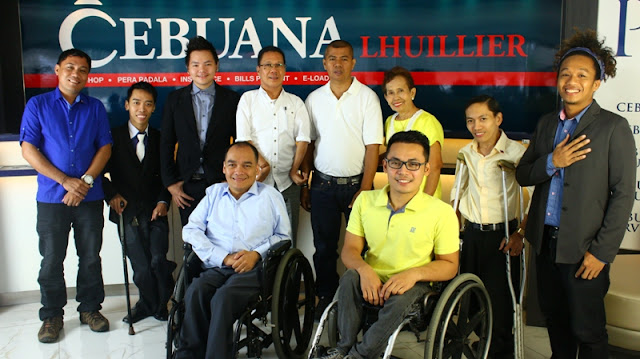 Of the more than 280,000 entries reviewed through judging sessions and deliberations, ten were identified to be the most compelling. From these finalists, one will emerge as the grand winner of the Search which will be announced during the awards night on September 10, 2015 at the Solaire Resorts and Casino. A P1 million cash prize, tax-free, awaits the Search for the Happiest Pinoy 2014 grand winner which can be anyone of these:

Johnny Medrano of Batangas has been deprived of walking since he was young but this did not stop him from learning basket weaving, embroidery, and drawing. Through hard work and determination, he was able to send his siblings to school. With the help of DepEd’s Alternative Learning System, Johnny was able to finish a vocational course in electronics and now runs his own watch and cellphone repair shop. He has also become a prominent resource speaker for different seminars.

Rustie Quintana was once a street kid in Plaza Divisoria, Cagayan de Oro City. Eager to learn, he was admitted to the DepEd’s Alternative Learning System program for free. He soon discovered his talent for the arts and started selling his artworks to send his siblings to school. In 2005, Rustie received an award from the British Council’s I am a Changemaker program while his organization received the Ten Accomplished Youth Organizations Award in 2012. He recently earned a degree in Development Communication from Xavier University – Ateneo de Cagayan.

Rodolfo Mendoza of Nueva Ecija was born handicapped but he did not let his condition get in the way of his education. Studying in a normal school, he excelled in academics, became a dean’s lister and earned an accounting degree. In 2008, Rodolfo received the Apolinario Mabini award as the Disabled Filipino of the year. Today, he serves as a PWD (person with disability) advocate, being the president of the Central Luzon Federation of PWDs and Region III’s National Anti-Poverty Commission Representative for PWDs.

Without prior teaching experience, Randy Halasan took a teaching job in Sitio Pegalongan, a remote area in Davao’s Marilog District. After years of teaching and immersing in the community, Randy was able to appreciate his job and is now the school’s teacher-in-charge. Through his efforts, a cultural-minority high school was established, bridges were built over two rivers he used to cross, and the tribe in Pegalongan are informed about their rights. In 2014, Randy was the only Filipino to win the Ramon Magsaysay Award.

Eduardo Hernal, Jr. of Taguig City comes from an underprivileged family. In 1992, he finished BS Criminology while serving as a soldier at the Philippine Navy Headquarters in Manila. During an Abu Sayyaf encounter in 2003, Eduardo was shot in the head and back. He miraculously survived the traumatic brain injury but was left paralyzed. Instead of dwelling on his situation, he studied Theology and became a pastor. Nowadays, he renders church services for free, sends scholars to school, and helps farmers earn a living.

Julia “Juling” Marquez, a 78-year-old retired teacher from Batangas, started working for her education at age 11, following the death of her mother. She worked as a helper, a vendor, and a store keeper to sustain herself through elementary and high school where she both graduated with honors. She married at age 19 but continued to work in the morning and study at night to graduate from the Philippine Normal College. Nowadays, Juling helps her community as an active church member and by sponsoring various medical missions.

Don De Vera is an “architect on wheels” from Las Pinas City. When he was just five months old, an accident caused complications to his spine which left him unable to walk. Determined to fulfill his dream of building houses and skyscrapers, he studied hard andfinished a master’s degree in architecture. He also earned a master’s degree in International Affairs in Comparative and International Disability Policy which he uses to help his fellow PWDs. He also designed a permanent homes for Yolanda victims in coordination with the NHA and DPWH.

In 2003, Cyprian Jade Basa, a 19-year-old student from Capiz, lost his home during a super typhoon. Guided by optimism, he was able to help his family and neighbors to recover from the disaster and even volunteered to help his community. He put up ‘Sama-sama Tayong Lahat Organization’ which conducts feeding programs, clean-up drives, and tutorial services. At a young age, Cyprian has already received various awards including the Ten Outstanding Boy Scouts in the Country in 2012 and the Gawad Geny Lopez Jr. Bayaning Kabataang Pilipino award in 2014.

Suffering from polio since he was a kid, Naprey Almario did not let his disability stop him from finishing his education and taking up a master’s degree. The former teacher and businessman from Davao City later formed a volunteer group called Behind the Rolling Chair, which reaches out to communities through different projects that help the poor and vulnerable children, especially those with disability.