The spookiest night of the year is coming up! Soon it’ll be time to slip on fun costumes and hand out all kinds of treats to the kid-sized ghouls, goblins, and ghosts who will come trick-or-treating. 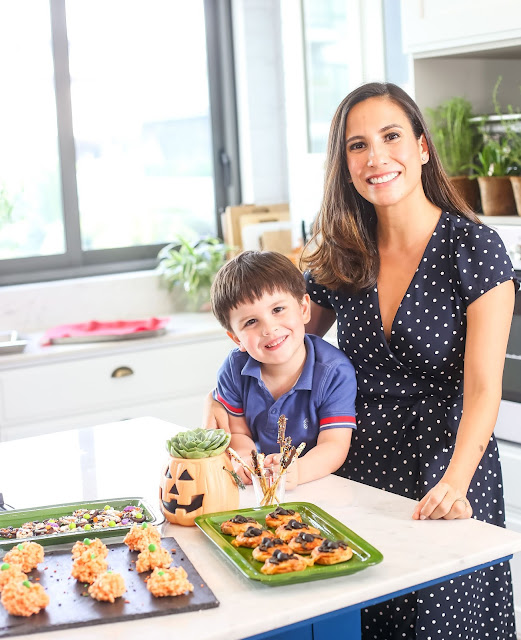 Children loves eating candies. But all that sugar isn’t very good for them, and it’s a challenge for parents to come up with tasty treats that are as creepy (or creepier!) than mass-produced chocolate eyeballs and gummy monsters.

It’s not impossible, though, to produce treats that are wholesome, tasty, and still thrillingly Halloween-y! One such parent is self-professed travel enthusiast, foodie, and writer Stephanie Zubiri-Crespi. As a mother of two young children, she recognizes that her boys should enjoy the thrill of Halloween just like all the other kids, but also knows that curbing their sweet intake during this candy-crazed holiday is also important.

To strike a balance between treats, Steph cranks up her trusty La Germania oven and breaks out her creative side. “It’s nice to go trick or treating and have a few candies,” the mother of two says, “but it’s also good to have more filling, healthier treats waiting back at home when the kids come in from trick or treating around the neighborhood. Having wholesome Halloween-themed snacks on hand keeps them from attacking their candy stash right away, and when they’re not feeling hungry, it’s easier to negotiate a more reasonable schedule with them for eating the rest of their candy loot.”

Spider pizza and spooky pretzels are great examples of quick, easy-to-make, and hearty snacks for kids fresh from the candy trail. Stephanie makes hers with one simple secret: she uses frozen pizza dough. “It’s faster and easier than making pizza dough from scratch, it’s practically foolproof, and kids usually appreciate the taste of it,” she explains.

To make spider pizzas, Stephanie loads a small disk of frozen pizza dough with toppings of choice: tomato sauce, cheese, and ham bits. She then takes an olive and cuts it into half for spider bodies, and then slices another olive for the spider’s legs. Another, smaller slice forms the head, and voila, a large black spider sits on top of a tasty pizza!
“You can use any topping your kids like,” Stephanie recommends. “As long as you decorate it with a Halloween theme, you don’t have to convince your kids to try it out. They’ll be excited to eat ‘scary’ food.”

Stephanie doesn’t recommend that mommies and daddies push themselves too hard to create a “perfect” Halloween snack. “If you’re stressed and you have less time to spend with your kids, nobody’s having any fun, and the holiday is all about having a good time shared with your children.”

If your kids like vegetables, slice up carrots, kamote slices, butternut squash, zucchini, and even potatoes into fun shapes like grinning faces, cats, and witch hats. Season with salt, pepper, and your favorite spices, drizzle with olive oil, and roast the veggies in the oven. They end up looking cool, tasting almost sweet, and being really nutritious!

Another thing you can do is bake whole wheat muffins ahead of time, and just pop a store-bought decoration on top of it. You can do the same with almost any baked good: cookies, cupcakes, tiny pies, and even toast slices!

The simplest treat of all is almost entirely store-bought. Gently melt some chocolate on your stove top, dip some store-bought pretzels in it, and sprinkle Halloween-themed candy sprinkles on it.
So this Halloween, opt for homemade treats for your little monsters and avoid the sugar crash altogether. Give these decorating tips a try, spend less time in the kitchen, and enjoy the thrills and chills of the holiday as a family!

I really want to make goodies to sell for Christmas! I want them to be cute, appetizing, and yummy.

I really want to make goodies to sell for Christmas! I want them to be cute and appetizing.