Mr. Pure Energy Gary Valenciano and Popstar Royalty Sarah Geronimo join forces for a one-of-a-kind collaboration that capture the joy-filled stories of Filipinos to mark the 40th anniversary of the country’s number one fast food chain.

Entitled ‘Apat na Dekada’, the upbeat and heart-warming song encapsulates four decades of joyful moments shared with generations of Filipinos who have made Jollibee a part of their lives. The song was composed by Thyro Alfaro in collaboration with Jollibee’s creative agency, McCann World Group Philippines. 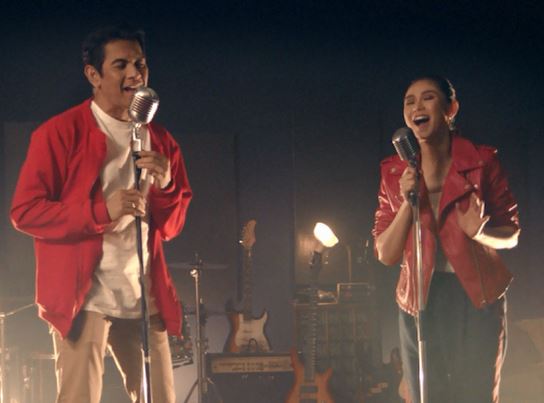 For the past 40 years, Jollibee has been a home to stars who have served as their brand ambassadors. The stellar list includes Sarah and Gary who headlined some of the most memorable Jollibee campaigns but none quite as special as the 40th anniversary anthem.

One of the brand’s first endorsers, Gary shared how it feels to have reached full circle, “I was happy then, overjoyed now because it is 40 years later and I’m doing something with them again.”

For her part, Sarah has been a part of the Jollibee family since 2005 and has since become one of the country’s biggest superstars, growing a wider audience in the same way that Jollibee has continued to spread its reach in the country and across the globe.

While recording the song, the two artists felt waves of nostalgia as they looked back at their own Jollibee moments with their loved ones.

According to Gary, he was very happy that the brand had gone global. “I think that they’ve really been able to master that touch of going out of their way, maybe even bending backwards, to stick to what is Filipino, through and through, and it’s now creating an impact. Now people are seeing the consistency and I think that’s something I commend them for. So I think expanding into other countries is not only going to bring a piece of the product to them but it’s also going to bring a piece of the Filipino heart to people all over the world,” he shared.

This is the first taste of many surprises in store for Jollibee’s 40th anniversary year-long celebration. Be part of this special milestone by watching the special music video (LINK) and relive your very own jolly moments!